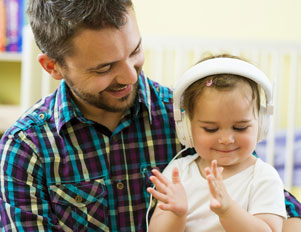 The pre-school years are characterised by the emergence of autonomy. Children are becoming more self-reliant, purposeful and self-guided, with expanding social competence and broadening social relationships.3 Their relationship with their parent provides the basis for their social and emotional development.

Pre-schoolers’ development may be affected by parental mental illness

The capacity of parents to provide appropriate care and stimulation may be challenged by mental illness. Symptoms experienced by the parent as well as any effects of medication may directly affect the quality of their interactions with their child which can result in insecure or disorganised attachments, their daily childcare, and routines such as pre-school attendance, or recreational and social outings.4,5 Where social isolation is experienced, opportunities to interact with and learn from other parents and children are reduced.

Pre-school children may not have the language skills to describe their observations and perceptions, but they will be aware of parental mental illness.6,7 They need to be included in conversations about what is happening, using age appropriate language which is concrete and provides reassurance, such as, ‘Mummy is taking medicine to help her get better’.7 Without this, they may draw their own conclusions, and attribute their parents’ illness to something they have done.6 It is important to let the children know that it is not their fault that their parent is unwell, and to give them information that dispels or reduces worry and feelings of helplessness.7

Pre-schoolers should be reassured that if their parent is unable to care for them there is someone who will until their parent is well enough. Family care plans are a practical way to show children that adults in their world are keeping them in mind, and can be regularly updated.8

When there is parental mental illness children should be observed for signs of distress. Behaviours such as withdrawal or acting out, extreme responses to situations, inappropriate familiarity with strangers or an inability to seek comfort from their parent may indicate that the child is being adversely affected and is in need of help. Possible interventions include:

There are many opportunities for further research relating to pre-school children, including the perspective of parents, and of families with preschool children of Aboriginal or culturally and linguistically diverse backgrounds.15 The role and experiences of partners, and grandparents as carers are two further areas of research that could enhance service provision to pre-school children and their families.16