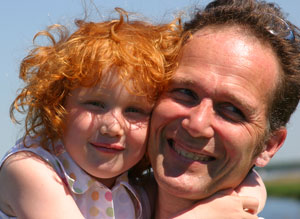 Children of parents with a diagnosis of borderline personality disorder (BPD)

Borderline Personality Disorder (BPD) is a pervasive and difficult to treat disorder. It is characterised by dysregulation of emotions, behaviour, cognition, sense of self and interpersonal relationships. The prevalence of BPD in the Australian community is estimated at approximately 1% of the population. BPD is generally associated with significantly poorer psychosocial functioning and greater service utilisation, compared to other psychiatric diagnoses.

The symptoms of BPD such as labile moods, impulsivity, interpersonal difficulties, suicidal ideation and self-harm are likely to pose significant challenges for individuals who also have a parenting role. Indeed, mothers with a diagnosis of BPD have reported high levels of dissatisfaction, feelings of incompetence and distress from parenting.1

In turn, this may increase the likelihood that their children experience behavioural and/or emotional problems. This hypothesis is supported by research which suggests that the prevalence of BPD in first degree relatives is five times greater than that of the general population.2

First, the available research is limited by small sample sizes and has predominately focussed on the experiences of mothers and children, with little consideration for the role of fathers with a diagnosis of BPD. Secondly, although it is acknowledged that children are at greater risk for transgenerational transmission of psychopathology, there is still a limited understanding of the mechanisms through which this may occur. In particular, there has been limited exploration into protective factors for children of parents with a diagnosis of BPD. This may include the involvement of spouses and other relatives such as grandparents, and participation in age-appropriate activities which promote healthy self-esteem and social relationships.

There is minimal research concerning the efficacy of parenting programs to support parents with BPD. However, there have been suggestions that parents with a diagnosis of BPD may benefit from psychoeducation about child development and recommended parenting practices, training in emotional regulation skills, mindfulness parenting strategies, and attachment-based therapies.11-13 The clinical practice guideline for the management of BPD also provides a number of recommendations for clinicians on how to support these families. In general, services that work with these families can aim to identify and support parents with a diagnosis of BPD from the beginning of their parenting journey; support parents whilst they are well to plan for the children’s care in the case of a possible relapse; prevent or minimise harm to children; and assist children and young carers to become educated about their parents illness and seek support and respite where appropriate. Finally, it is also important to acknowledge that many parents with a diagnosis of BPD are capable parents, and not all children will go on to experience difficulties. Future research could benefit from exploring the factors which promote resilience within families where a parent has a diagnosis of BPD, to inform strategies to support those families that are at greater risk of adverse outcomes.